Azimio and Kenya Kwanza will have to wait longer to determine which political faction holds the majority of MPs in the National Assembly.

Speaking on the floor of the House on Tuesday, October 4, Speaker Moses Wetangula said he could not execute Standing Orders 19A(1)(4) and 20(A)(5) because he had received several lists of majority nominations. leadership in Parliament.

Wetangula admitted that the situation caused a dilemma and therefore asked the members to discuss the issue in the house before he stepped down to make a final statement.

“Faced with these conflicting correspondences, you will agree with me that it is impossible for me and the Registrar to fulfill these requirements of the rules of procedure at this time.

“On the first question, honorable members, I will reserve the remainder of today’s sitting to allow the House to address me on this matter so that I may withdraw to give my advice”, noted the president.

The battle for supremacy between lawmakers affiliated with President William Ruto and former prime minister Raila Odinga threatened to disrupt the work of the House given that the House Business Committee is elected by majority.

Wetangula dismissed this notion stating that the settings will not be affected by the same and will continue as intended. With this in mind, he chose his assistant Gladys Shollei to oversee the conduct of certain household affairs.

“I will exercise my powers under Standing Order 1 and authorize the Deputy Speaker to table certain documents in the House which have a statutory time limit and which the law requires to be tabled in the House during his first session,” he said. declared.

In addition, Shollei will give a notice of motion on considering the President’s address and another on limiting debate on the same. It will also give Members the opportunity to debate the motion.

The President explained that the next session will focus on the speech delivered by President William Ruto at the opening of the 13th Parliament. It will be discussed in the house from October 5 to October 11.

During his presentation to the House, MP Kikuyu and Kenya‘s candidate Kwanza for Majority Leader Kimani Ichung’wah argued that the Azimio coalition was a party, but did not have a single seat in the party, therefore the minority.

“The question before you is what is the largest political party or coalition of political parties, and that party must be a parliamentary party,” Ichung’wah proposed. 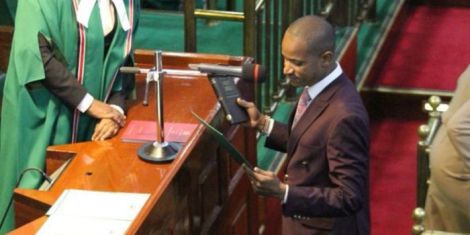